In my last post[“Mama, it was true! Your Daddy was in World War I!” ], I discovered that my Grandfather, Alsen Jason I had been in World World I.  This was a significant finding in my genealogical research, as it had been one of my mother’s questions for me when I started tracing my ancestry.  On this Memorial Day, I thought it would be good to share some newly found details.

As I mentioned in my previous post, I submitted a request for my grandfather’s military records.  Years ago, I had submitted a request, but the results of the search showed that he was not in the War.   Now, after I actually found the correct Louisiana World War I Services listing, I was able to provide the alternative spelling of my grandfather’s name, which was used during his service.

When I think of my relatives in Louisiana, many of them have limited their lives to only Ville Platte and the surrounding areas of Louisiana.  A few of these Louisiana clan members have ventured out mostly to places like Texas, and a visit here and there to California, where you find a lot of transplanted Louisianans.

Imagine my surprise, then, when I found my grandfather, Alsen Jason, not only enlisted in World War I, but actually in New Jersey catching a ship for him to serve overseas in France.  How’s that for a Bayou Chicot native!

I guess I need to backup a little and tell you what additional information I recently found.  From the Louisiana Service record, it states that my grandfather went overseas September 8, 1918 and returned to the States June 28, 1919 – nine months in a foreign land.   The key to finding the information was having the correct spelling of the name under which my grandfather served.

My initial response from the National Personnel Records Center is that they do not have any records for my grandfather, Alcin Jasson [Alsen Jason].  Here’s the response I received:

Thank you for submitting a request to the National Personnel Records Center.

We have received your signature authorization for request number 2-xxxxxxxxxxx.

The record needed to answer your inquiry is not in our files.  If the record were here on July 12, 1973, it would have been in the area that suffered the most damage in the fire on that date and may have been destroyed.  The fire destroyed the major portion of records of Army military personnel for the period 1912 through 1959, and records of Air Force personnel with surnames Hubbard through Z for the period 1947 through 1963.  Fortunately, there are alternate records sources that often contain information which can be used to reconstruct service record data lost in the fire; however, complete records cannot be reconstructed.

We are mailing you NA Form 13075 (or NA Form 13055) which asks for additional information concerning the veterans’ military service.  Please use this form to provide us with as much information as you are able.  This information will be used by our staff to help reconstruct service record data lost in the fire.

The form will be mailed to you within the next 24 hours.

I completed the NA Form 13075 as suggested by the personnel office.  The alternative records are scheduled to be sent to me sometime in mid-June 2017.  I can’t wait for what they find.

I decided to see what additional records I could find in the online search databases.   Ancestry.com has a database–U.S., Army Transport Service, Passenger Lists, 1910-1939–that housed more information on Alcin [Alsen].  The records shows that my grandfather, Alsen, left the States via the USS Mercury on September 8, 1918 out of Hoboken, NJ. He listed his mother, Louisa Joseph, as next of kin.  I found that the the Louisiana document had an error.  Per the transport record, Alcin Jasson was part of the Supply Company of 806th Pioneer Infantry.  The Louisiana document mistakenly stated he was a member of company 606th. 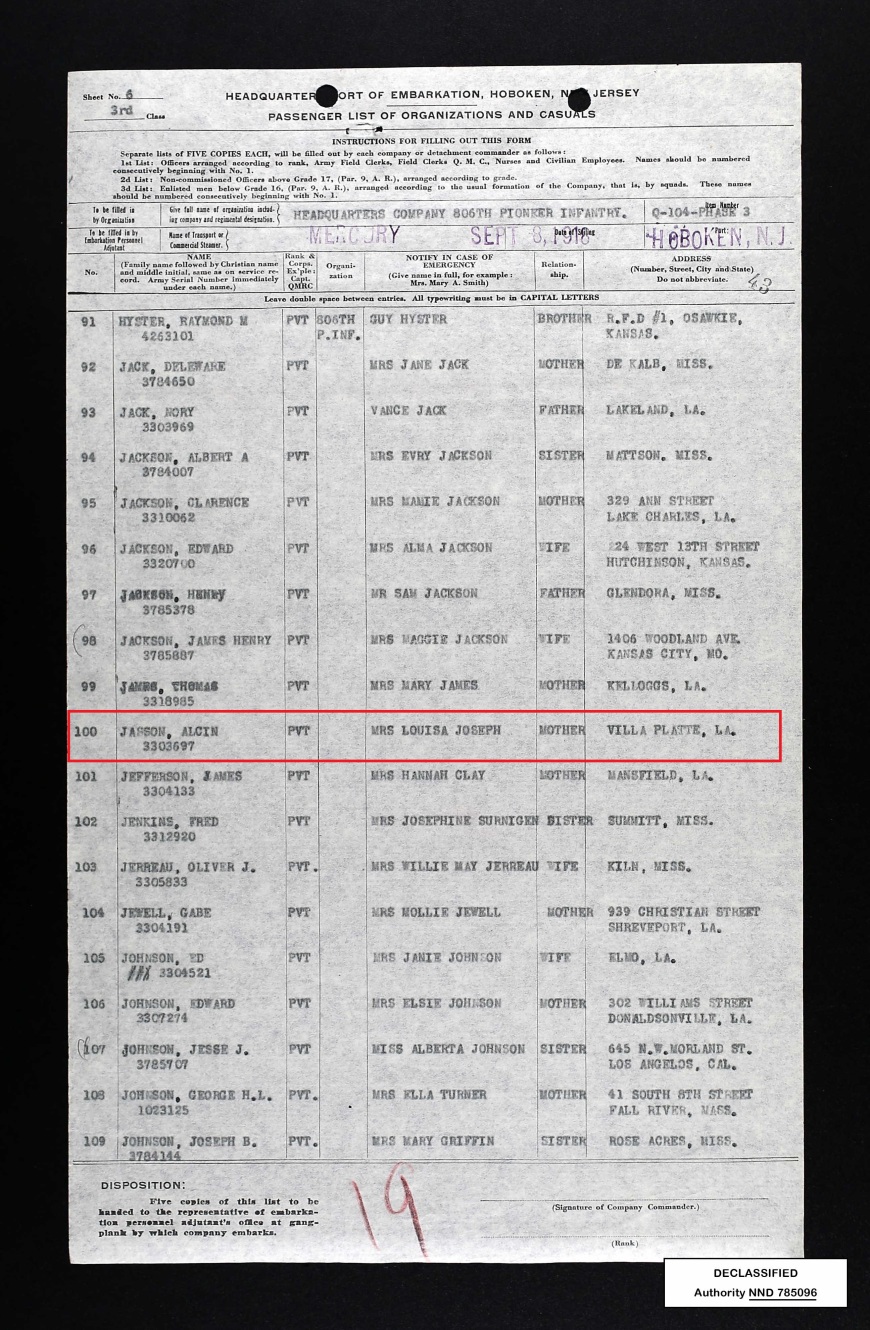 I was even able to find a picture of the USS Mercury ship:

In reviewing other documents, I was able to get information as to where Jason served overseas.  Fold3 has records of experiences filed by the officers of the 806th Pioneer Infantry.  In his December 6, 1918 memo, B.J. Kavanagh, documented the experience report of the 806th Pioneer Infantry which included the supply companies.  He states that the group sailed out on September 8th, 1918 on the USS Mercury and debarked at Brest, France, 14 days later.  They were initially at Camp Potanazen then, on the September 28th, they arrived at Foulain.  Later, they were put up in a civilian village of Mandres until October 3rd, when they returned to Foulain and finally made their way to Leonval.  This report didn’t speak much about the supply companies.  Here’s Kavanaugh’s experience reports submitted about the 806th Pioneer:

On Ancestry.com I also found the transportation information from France, for Alsen.

As we celebrate and remember those who have served and many who gave their lives for this country, let us also remember that many fought in foreign lands only to return home to be persecuted and treated as second class citizens in the country for which they fought.  May their fighting not be in vain.

For the last 25+ years, I've worked as a finance executive for a global corporation. About 20 years ago, I started seriously researching my family ancestry, and I was able to trace both my maternal and my paternal line back to 1700s. I've identified ancestors that were free people of color. I've even traced several separate lineages of my enslaved ancestors through slave property rights documentation. I've helped many with their personal genealogical quests and I've shared my personal genealogical findings on my blog: Ancestors in the Present. In 2017, I will begin doing workshops and seminars to help others get started in genealogy. I also have run Ancestral Pathways LLC, which provides genealogical services. If you would like my help, I can be reached at iyatee@gmail.com. View all posts by iyatee

2 thoughts on “Memorial Day Salute to My Grandfather!”

how I found her name